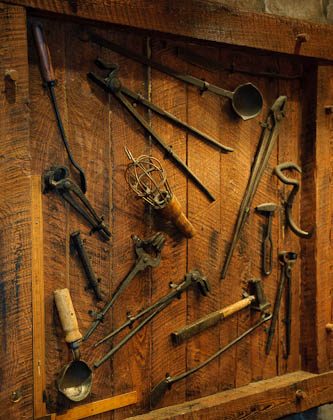 In another era, La Forge was for many a synonym for a warm, welcoming place. Here in the Laurentians, as well as being a meeting place for the villagers, the forges had another role. They were also the first ski shops.

According to Mr. Théodule Huot, whose nickname was Titi ‒ poet, painter and expert skier from the Laurentians. He also became a member of the Skiing Hall of Fame. The forge was the place where knowledgeable skiers went to have their skis repaired and where, for the modest sum of ten cents, they could also have them waxed.

It was also the place where, dry and toasty before a warm fire, skiers liked to tell stories of the day’s exploits… like the cheery co-conspirators they were. It was in this way that a number of ski legends were born…

Today, in memory of the era, La Forge welcomes you in a warm ambience which, we hope, will witness the birth of many new legends.